For those of us who has traveled in a train, might had have seen a Emergency pull chain.

The chain is used to stop the train ta a time of an Emergency ( or not ? 😛 ). Yes, most of us may know it in a bad way when people carelessly pull the chain in no emergency. Most of us though know what Pull chain is been used for but  does not know the exact mechanism of it. Here is a brief description of what exactly happens in a Train when you pull the Emergency chain 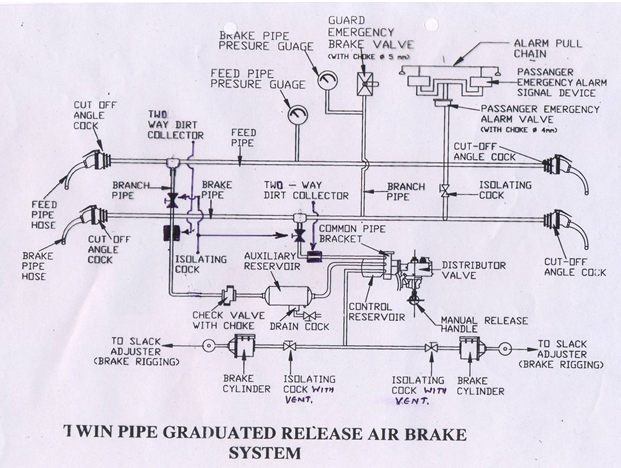 In a Typical Indian train the coaches are interconnect by two pipe hoses. The alarm pull chain is in continuity with the Brake pipe (As in the Schematic diagram above) constantly maintained at a specific air pressure i.e 5kg/cm2 .
when ever the chain is been pulled some Air (earlier vacuum drop was used) escapes from from the Passenger Emergency Alarm Valve ( PEAV ) vent.
This drop in pressure causes results in application of the brake cylinder/piston assembly in the bogie of the coach, that starts pressing the brake pads on the wheels or disc of the entire train.
The loco pilot also notices the air pressure drop in the gauge and then uses his own skills to help the train stop comfortably.
This process happens over a period of 2 to 4 minutes on a train that is running at 110km/hr.
As soon as there is pressure drop, the driver whistles in “two short one long”  to indicate to the guard and the train TTEs that there has been Alarm chain pulling.
The guard’s compartment also has the air pressure gauge which gives him an indication.
Also recently the coaches have been fitted with emergency flashers on the side walls of the coaches, and these flashers are also activated when the brake pipe pressure is lost for any reason other than the driver’s application of the brakes. 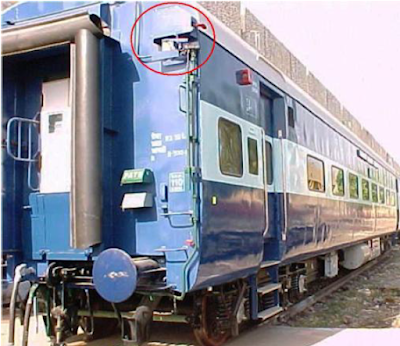 Assistant Driver and Guard find out in which coach the ACP actually occurred and help to “put right” the concerned coach i.e. the lever needs to be manually reset that helps releasing the brakes of that coach. Until this is done, the lamp and buzzer in the locomotive cab are continuously activated. The airpressure system again builds up air pressure and that releases all brakes of all coach and the train gets ready to depart.
Technical Mechanism :

These two components in combination give an indication by reducing Brake Pipe (BP ) pressure to the Loco pilot and Guard that some passenger is in need to stop the train. The indication is transmitted from the coach in the form of reduction in BP in BP Gauge when the passenger pulls the chain. 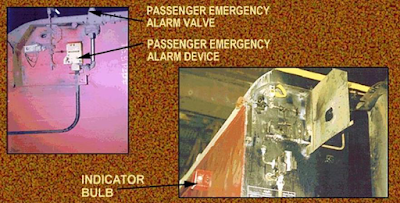 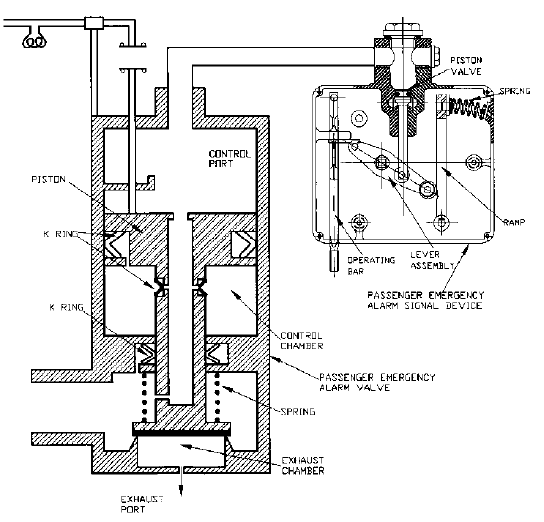 Passenger Emergency Alarm Signal Device (PEASD) is a manually operated pilot vent valve. It is operated through mechanical force exerted by pulling the alarm chain provided inside the coaches for emergency use.
The passenger emergency alarm signal device does not need any maintenance during normal service except when it is found damaged or is due for periodic overhauling.

Working: When ever chain is pulled to stop the train, the rocker arm provided in PEASD slides and actuate the pilot valve to open the atmospheric hole, as a result the BP pressure is reduced in PEASD. As the PEAV is connected in series with PEASD resulting BP pressure is also reduced in upper chamber of the PEAV. Due to variation of BP pressure in both the chamber of PEAV the main valve floats from its position & relate the lower chamber with the atmosphere after opening of the modified choke (8 mm dia.) this fast venting of pressure create reduction of pressure in BP pipe of the said coach & brakes take place to stop the train.
SOURCE – railmaniac.blogspot
for more train related information

KNOW ABOUT – How Does the “Emergency Alarm Chain Pull” stops the Train?